A biometric door is basically fitted with a device that allows access to individuals based on successful recognition of physical characteristics such as retina/iris, handprints, fingerprints and DNA. It can primarily augment security by preventing unauthorized access. There are various types of locks that can be installed with various levels of sensitivity. Both home owners as well as businesses can benefit from employing such a device. The recent advancements in technology have made these devices affordable for the general populace as well.

A biometric door lock can be primarily based upon a fingerprint scanner as opposed to ones that require a specific combination. With a normal lock or a standard combination keypad, one has to always remain wary of the fact that he or she does not forget their keys. Also, one has to make the effort of memorizing a specific combination. On the other hand, keys and a particular combination code can easily be acquired by people attempting to gain unauthorized access. Consequently, such locking mechanisms are extremely unreliable and cannot provide the level of security that is required by a normal individual.

Biometric door locks are perfect for individuals who want to augment their security in terms of completely preventing unauthorized access as well as not having to go through the hassle of carrying keys around or having to memorize a specific keypad combination. Fingerprint scanners being manufactured nowadays are extremely affordable and have the ability to store approximately 75 fingerprints on average. Such locks also enable users to conveniently and expediently unlock their houses. Especially in situations where it’s raining or one needs to get into his or her house quickly, a fingerprint scanner is perfect for such circumstances. One would not need to spend the extra minute searching for his or her keys or go through the hassle of having to punch in a specific key combination.

Biometric fingerprint door locks also have the ability to affix further security through the inclusion of a combination lock. Consequently, one can setup his or her locking mechanism in such a way so that both a fingerprint scan as well as a combination lock is required for successfully unlocking the security mechanism. These appliances are also equipped with built in alarm systems which can automatically inform nearby police stations if the wrong combination or fingerprint is scanned consecutively three times.

Consequently, a biometric door is an extremely resourceful and versatile device in terms of providing augmented security as well as convenience.

Advantages of a Biometric Door Lock

Biometric security is becoming common on airports and other sensitive areas which are prone to security threats. The requirement for increased security is the reason that biometrics security has an increase in demand in comparison to the conventional security methods.

At airports, biometric security is used to run face identifications of passengers entering or leaving the country. In case the security authorities are looking for a person who is a potential threat, he would be traced easily when his face image is compared by the biometric security to the image provided by the authorities. In most US airports, the biometrics has almost become a standard procedure when it comes to screening passengers.

The number of online transactions in comparison to physical transactions has increased. As a result, the demand of a system that would ensure that the transactions carried out online are safe has also increased. Biometric security systems are being used by banks these days to ensure that the financial transactions being carried out online are safe. The conventional way to carry out an online transaction would require some sort of password. In case the password falls in to the wrong hands, it can be misused and the bank can not be blamed for it. Biometric security devices such fingerprint scanners or retina scanners that are required by banks these days are fool proof in the sense that both these things can not be hacked or altered.

Biometric security systems devices are also used in offices. These days, biometric office doors are installed instead of conventional doors. In most cases, these doors accept a fingerprint scan of the employee and then unlock. A biometric office door does not require any sort of key, thus the problem of duplication of keys as well as a break in are abolished.

Trinity offers three lock system just like our best fingerprint door lock, but it is considerably inferior in quality than Samsung EXON. It stores up to 99 fingerprints into its database, which is a nice number, but it may not be enough if you wish to add security to your workplace. It is a good solution for a house or a smaller building, and you can trust it to up your security level considerably – you can mechanically lock it, enter a pin and scan your fingerprint with this door lock. The combination of these three locking systems makes this fingerprint door lock virtually unbreakable.

Samsung fingerprint door locks have proven its quality and this one does not disappoint either. However, unlike Samsung Exon, this fingerprint door lock lacks certain options which make this door lock more suitable for securing your household or a smaller building. This unit includes a handy remote which may appeal to some, and looks great overall, which is yet another advantage. There are some very functional locks that simply look bulky and aesthetically unattractive. With Samsung, you cannot make a mistake in this aspect. It uses top-notch fingerprint recognition technology which makes no errors.

iTouchless stores up to 150 fingerprints into its database, and allows you to have 78 users that can use passwords instead. It is a solid multi functional fingerprint door lock which will not disappoint, and is great for households, small offices and small buildings. It also looks very good and it is not bulky, it is scratch and water proof, which improve its overall value. This fingerprint door lock is an average price unit, but it justifies its price fully. If you need a fingerprint door lock for your home, this might be your unit.

This is another fingerprint door lock that also allows you to set up a password and use a mechanical lock. This makes it a great door lock in high risk areas, as it is virtually impossible to break into a space secured by this type of lock. Its design may not be much, but it does its work. This fingerprint door lock is great for securing warehouses, garages, smaller buildings etc. but may not be the best choice for a household of an office simply because of its aesthetics. Other than that, it offers a great security system for a relatively low price.

This moderately priced fingerprint door lock is a great solution for a house, a small building or an office. It offers you the possibility to store up to 99 fingerprints into its database along with one master fingerprint of the owner or a person who manages the office or business. This fingerprint door lock also has a very practical slide cover for the fingerprint sensor which can prevent it from sustaining any damage. This is a great advantage, as it its gorgeous design which may be the decisive feature for some people who feel better having a good looking lock no matter if they are going to pay a little extra.

Scyan X7 is another three way lock that enables you to lock the door mechanically, by a password or pin, and via its fingerprint sensor technology. It stores up to 100 fingerprints and 100 password combinations which should be more than enough for a small business, an office or your household. The handle is easily reversible from right to left, and the lock itself is aesthetically pleasing and not too bulky. For its price, and considering that it offers a three way lock, this fingerprint door lock unit is a real bargain. It is also quite easy to install, which is a great advantage as well. 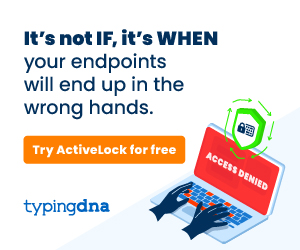